Tesco Mobile has again been praised as the most customer-friendly mobile network in the UK.

Complaints data released by Ofcom today puts Tesco Mobile firmly at the top of the rankings.

The number of people complaining about Tesco Mobile services has dropped again, from 3 out of every 100,000 customers to just 1 in 100,000.

It’s the 14th Ofcom report in a row that puts the supermarket’s SIM Only offering as the best in the UK. 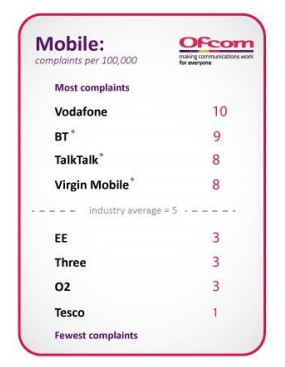 The data covers the three months between July and September 2017.

By comparison, the most complained-about mobile provider is again Vodafone.

The main complaints about Vodafone were around billing, pricing, charges and service drop-outs, then the way the company handles complaints and faults.

BT Mobile and TalkTalk also appeared in the top three most complained about mobile services.

Other providers congratulated for low complaints numbers include EE and O2.

More: People in UK now use 1.9GB of mobile data a month

Tesco Mobile launched in 2003 as a low-cost alternative to the main UK mobile providers.

It runs as a mobile virtual network operator that piggybacks on the O2 network for 4G data and call signal.

Speaking to SIMOnlyDeals.co.uk, Tesco Mobile Chief Marketing Officer Simon Groves highlighted the difficulty of operating in a hugely competitive market, but said he was delighted by the record-breaking result.

He said: “We are delighted to be recognised by Ofcom as the least complained about mobile network for the fourteenth consecutive quarter.

“This recognition is down to the hard work of our team, who continue to break industry records year after year and consistently deliver the very best service.

“In an even more crowded and competitive market, we will always lead the industry in by simply keeping our customers front of mind; offering flexibility, excellent value, control over your bill, and of course, great customer service.”