The Samsung S9 and its cousin the S9+ have been revealed to the world ahead of the Mobile World Congress in Barcelona.

The flagship phones, which will go up against the heavy hitters of Apple and the new range of Chinese challengers in Honor and Huawei, will reach high-street and online shelves on 16 March 2018.

The S9 and and S9+ are available for pre-order from 25 February in a choice of black, grey, blue and new lilac colours.

The addition of a dual-aperture camera is attracting the most attention with super-super slow-mo of 960fps, breaking video down to ultra slow speed hitherto only available on professional sports video and TV cameras.

Apple’s £999 iPhone X can only produce slow-motion footage at 240fps.

The camera apeture of f/1.5 means much improved low-light photographs with less grain and artifacting, and Samsung says the lens can let in 28% more light that the S8.

Multi Frame Noise Reduction compresses multiple photos into one image, taking the best parts of each to end up with one complete image with vastly reduced noise.

The 12-megapixel rear cameras have lenses that dynamically adjust between f/2.4 and f/1.5 depending on the light conditions. 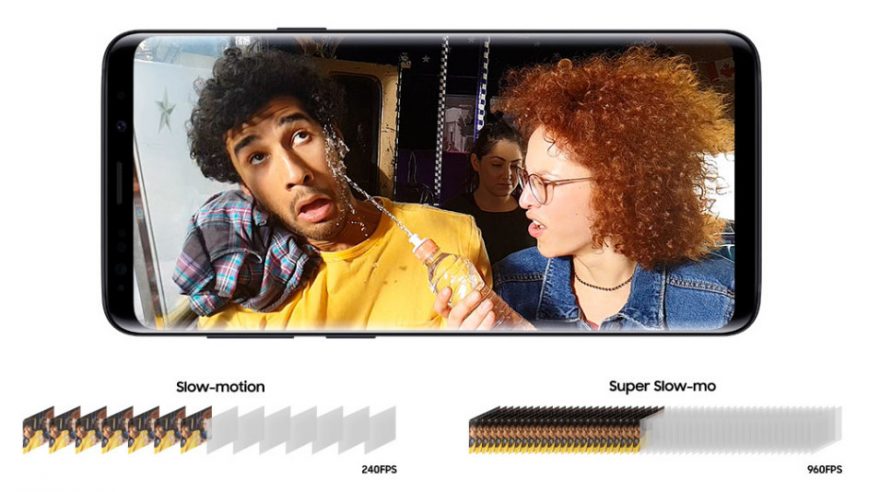 Samsung has built on its best features with a better camera, more storage and faster processors compared to the S8.

While the appearance is markedly the same as the S8, the bezel-less S9 comes with a 5.8-inch Super Amoled screen promising super high QHD+ resolution (1,440 x 2,960 pixels).

The S9+ is slightly larger with a 6.2-inch screen with the same resolution; both run on an aspect ration of both are “near bezel-less”.

The S9 will run using Samsung’s own Exynos 9810 processor in the east while users over in the UK and US will see it use the Qualcomm Snapdragon 845 as standard.

Those hoping for 8GB memory as standard will be sorely disappointed

With only 4GB of RAM to run the S9 and 6GB for the S9+, Samsung has conceded it is willing to be beaten on value for money by Chinese manufacturers like Honor.

Internal storage on both the S9 and S9+ is 64GB or 128GB and you can expand this using the latest generation of microSD cards capable of holding up to 400GB.

Samsung’s digital assistant Bixby has faced strong criticism from the industry. As Arstechnica wrote last year, the tech came out buggy and early, feeling like it was “several years behind the competition”.

This latest version promises to use the camera to revolutionise the use of augmented reality.

Simply pointing your camera at an object in real time will bring up a host of information directly about the image, as well as giving you helpful shopping options and extra online search info.

Bixby can also translate foreign languages in real time by pointing the camera at the text, even if that’s a menu or non-standard font like a road sign.

Along with the now-standard fingerprint scanner, Samsung has given users the option to use a second fingerprint to access secure folders and files.

Any non-fans of Samsung bloatware, look away now, as the S9 and S9+ are loaded up with the company’s SmartThings app to encourage more people to buy into smart home products that you can control from your phone.