Ofcom is calling for all Android smartphone owners to join their research project to improve Britain’s mobile phone services.

Once launched, the Ofcom app runs in the background and collects data about your network speed, uptime and reliability.

Over 4,200 people joined up for the last project which covered September and December 2016. 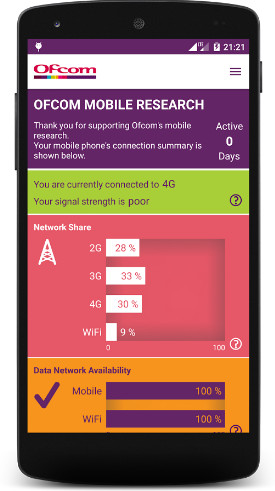 The headline stats on the last project found that Three’s 4G service was only available 50% of the time, while EE scooped the award for most reliable network.

What does the Ofcom app measure?

Guide: Which network is my SIM Only deal on?

Ofcom already have a tool so mobile users can check whether a particular network works well where they live.

Click here to go to our sister site BroadbandDeals.co.uk where you can see whether EE, O2, Three or Vodafone would be best for you, and to check 3G and 4G performance near where you are.

The data gathered will be brought together into a national dataset to be published in Spring 2018.

How to join the project

To join Ofcom’s project, download the Ofcom Mobile Research app from their site or from Google Play Store.

Once downloaded the user will be asked some basic questions such as their age, gender, occupation, postcode and home broadband availability.

The app will automatically measure the performance of mobile and WiFi networks. This will be displayed on the app’s home screen so you can see exactly how services are performing.

This includes the current network the phone is using and its signal strength, as well as the proportion of time spent on different networks.

Ofcom reiterated they take data protection very seriously and any data gathered will be anonymous. If you have any queries contact mobileresearch.app@ofcom.org.uk.