iPhone users are reporting a tremendously annoying keyboard bug that comes from the latest Apple iOS update: they are unable to type the letter ‘I’.

The autocorrect problem means that every time the letter ‘I’ is typed, it is replaced with the letter A and an unreadable Unicode character, sometimes five horizontal lines and at other times, a question mark in a box.

This is not happening across all iPhones but has been reported on social media across iOS 10 and the latest iOS11.1 update. 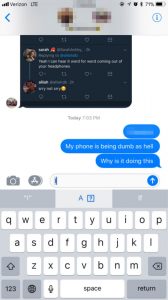 Where did it come from?

What caused the keyboard error is unclear but it appears to relate to Apple’s predictive text code and the way it synchronises with Apple Cloud.

Reddit user u/thecravin first posted about the bug, writing in an iPhone thread: “Okay, so this is pretty weird, and I’m not sure what to think of it.

“So two of my friends are running the public version of iOS 11.1, and when they type the letter “I”, the first suggestion they get is a random operator character (like “A”, or “#”, or “!”) and then the Unicode character for “Hey I can’t read this”, the little box with a question mark.”

“I thought that was weird, but then I saw a tweet where someone clearly tried to type “I”, and it instead showed the “A” operator and then the question mark character.”

How can you fix it?

Apple insider website macrumours.com reports that some Apple technicians have alerted users to a workaround.

Apple haven’t commented yet, but the problem is obviously affecting a large number of iPhone users because they have put out this temporary support document on their website, which details a possible workaround.

It has not been confirmed that these workarounds will work for everyone experiencing the bug.

It leaves many iPhone users twiddling their thumbs and waiting for another Apple update to fix the problem.