EE customers from Plymouth to Dundee are fuming after an unidentified fault crippled the mobile network. 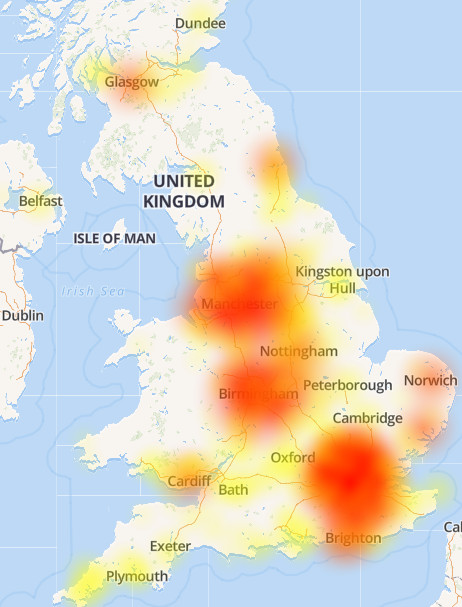 Many of the complaints relate to landline calls, which could point to a significant fault, unlike regular issues with mobile networks.

Furious customers also took to Twitter to give the telecoms company a piece of their mind – not good news for EE, who run the risk of a social media blunder as tensions run high.

Emergency calls, as well as all data and messaging services, are working as normal. We apologise for any inconvenience caused.

When EE attempted to assuage her concerns about emergency services, she fired back with “I’m not talking about 999, not everyone uses smartphones. I think your [sic] not understanding my point.”

Down Detector, a site that logs problems with mobile and broadband networks, listed the first complaint at 7:56am.

On Monday evening most complaints switched to problems with EE home broadband.

Users on the site have been leaving comments all day. Some want to know when the problem will be solved, others bemoan the service or demand refunds.

One poster, Alistair Gray, said he had spoken to EE about the fault.

“They called me back after my call dropped. They say they still don’t know the cause so cannot advise when it will be resolved. Fair play to the support team, but shocking the network is in major meltdown.”

Cheryl Brown said: “I do hope we’ll be recompensed on our next bill. Can’t even be bothered to update us! EE are ‘nothing nowhere’ at the moment. Seriously considering changing provider.”

EE tweeted to say the problem has been resolved, but there is no word on what caused the issue and many are still left unable to connect to EE’s login pages.

Problems were reported country-wide early on Monday morning and appeared to peak around midday.