Data tethering with Android is an ingenious process where your phone shares its connectivity with other devices.

Perhaps your home internet is down but you need to send an email from your PC. Or maybe your tablet isn’t connecting to a network that your phone is already logged onto.

There are third-party tethering apps, but we recommend using the method integrated into versions of Android since 2010.

Not every SIM lets you data tether so it’s best to clue yourself in to which companies do and don’t allow it.

You can avoid hours of frustration battling through a series of Settings that don’t seem to work, only to find out that you can’t do data tethering with Android anyway.

Plusnet is the most popular SIM Only firm for data tethering, as there are no restrictions on the amount of data you can set aside for tethering, and it uses the fastest 4G network in the UK, EE.

Virgin, while they offer some of the biggest data deals around, and also use EE, don’t officially allow tethering.

O2, Three, Giffgaff and Smarty are all data tethering-friendly, but not on every deal.

Check our SIM Only comparison tables to see which brands allow it and which will shut you out. 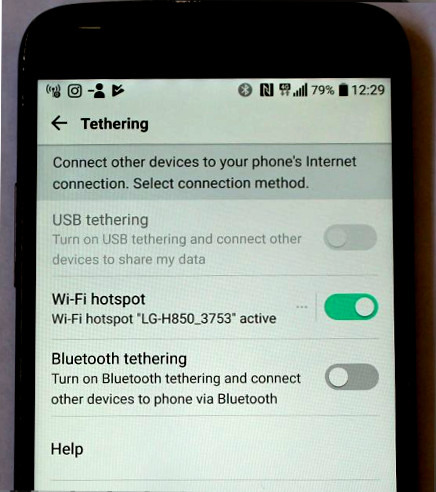 Tethering rapidly drains mobile data and battery life, so it’s only recommended for emergencies or where you can plug your phone in.

Even so, knowing how to tether may prove very useful.

The instructions below are for the most popular version of Android (7.0, also known as Nougat), but other versions operate along similar principles:

This is useful for getting a laptop or desktop computer online, if it’s unable to connect to the internet through WiFi or other means. 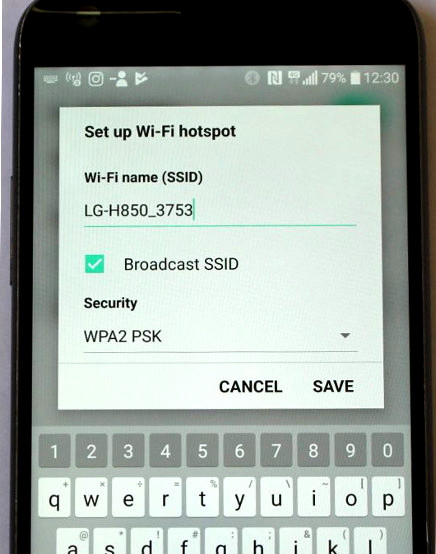 Turning your phone into a WiFi hotspot is the standard tethering method, and Android supports up to eight simultaneous connections from external devices.

This is much simpler.

Slide the button right on the Tethering menu, and your phone will automatically share its internet connection for other devices to piggyback from.

Connection procedures vary depending on the hardware you’re tethering, and you’ll typically have to pair your laptop or tablet with your phone before starting.

Bluetooth is a much slower method of data transfer than WiFi, and rarely worth using unless your battery levels are running low and you don’t have a charger handy.

A couple of months ago, your correspondent was writing an article for this website when the phone rang. It was an unremarkable-looking mobile number, whose last three digits were 327. Upon answering, there was a slight pause before the line...
Read More
Every year, there are 1.5 billion new smartphones sold around the world. And while some of these sales are to first-time smartphone owners in developing nations, it’s fair to assume the majority will be to replace an existing device. Amid...
Read More
You may not have heard of the Institute of Customer Service, but they are the unofficial auditors of how British companies deal with their clients. Twice a year, this independent professional customer service body publishes a guide revealin...
Read More
Like an interrupted preview of a future we barely understand, the UK’s rollout of 5G has so far failed to live up to the hyperbole. With only a sliver of the 3.4GHz frequency band released thus far, some UK 5G networks are slower than the...
Read More
Incredible as it may seem today, mobile phones were fairly passive and largely offline devices as recently as the mid-Noughties. There were no app stores, no 4G connectivity and no mobile versions of desktop web browsers. Internet Explorer ...
Read More
If you live in the heart of a major city, it’s easy to take mobile network coverage for granted. If you live in a rural county like Cornwall or Pembrokeshire, you’re unlikely to be so blasé. Mobile network coverage varies hugely across...
Read More
It’s almost exactly ten years since the Apple iPad debuted in a world that had hitherto existed quite happily without tablet devices. In 2010, digital communications took two main forms – through desktop and laptop computers, or across ...
Read More
It’s a common scenario. You log onto a website to perform a financial transaction, enter your card details, and a message flashes up. “For your security, we need to confirm your identity by sending a verification code to a number ending...
Read More
Once upon a time a Pay-As-You-Go deal was exactly that. Pre-paid SIMs were once marketed extensively and were highly successful. They helped transform the mobile phone into an essential item. But their popularity has been in decline for so...
Read More
Virgin are offering triple data on their 12 month tarriffs this month. Both cheap SIM Only deals hunters and major data addicts are set to benefit. Virgin piggybacks on the EE network, consistently rated the UK’s fastest 4G network b...
Read More
O2 has hit the reset button on its SIM Only deals adding huge chunks of data and minutes to its 12 month offers. Bringing back the basics, O2 is focusing on big data deals at reasonable prices. Cheeky added extras are included in the bundle...
Read More
If you’re in the market for a BT SIM Only deal then now’s the time to strike. For their 2018 Easter sale BT are effectively offering free cash in the form of a prepaid Mastercard Reward Card that you can spend anywhere you like...
Read More
Back To Top